First Response and Nuix were recently instructed to analyse of 3TB of data for a client in a recent high-profile misconduct probe.

Working together, we were able to locate critical data within hours of the investigation starting which saved the company weeks of analysis had this been carried out internally using existing procedures.

You can read more abount this high-profile case by clicking the graphic below: 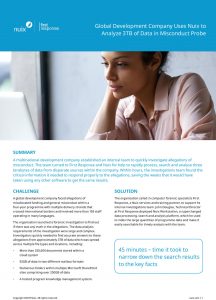 Counterfeit sales of your product

First Response was instructed to act for a well known watch maker to deal with a number of websites that were targeting their brand with counterfeit goods. Whilst the brand was able to identify a small number of what appeared to be different websites and registrants, First Response was able to identify the Organised Criminal Network (OCN) behind the majority of the websites identified by the client and also link a large number of other unknown websites that had been registered by the same OCN that were also targeting the brand.

After identifying the threat, we worked with the client to risk assess all of the websites that were targeting the brand and removed the highest risk websites from global DNS (the Domain Name Service which converts website names to actual servers) within ten working days, effectively knocking them off the internet.

The remaining websites were also suspended when their perceived risk increased or as directed by the client.

We are constantly monitoring the local country level domain networks where the client has a presence as well as the global domain networks, removing any infringing websites as soon as they appear.

The web is now virtually clear of websites selling counterfeit goods that target this particular brand and we continue to pro-actively monitor this (and many others) space. The client has noted an increase in sales and a drop in claims related to fake goods.

Whilst this case study may seem quite bad (it is!) it is also very common and reflects the average type of incident that we respond to, week after week.